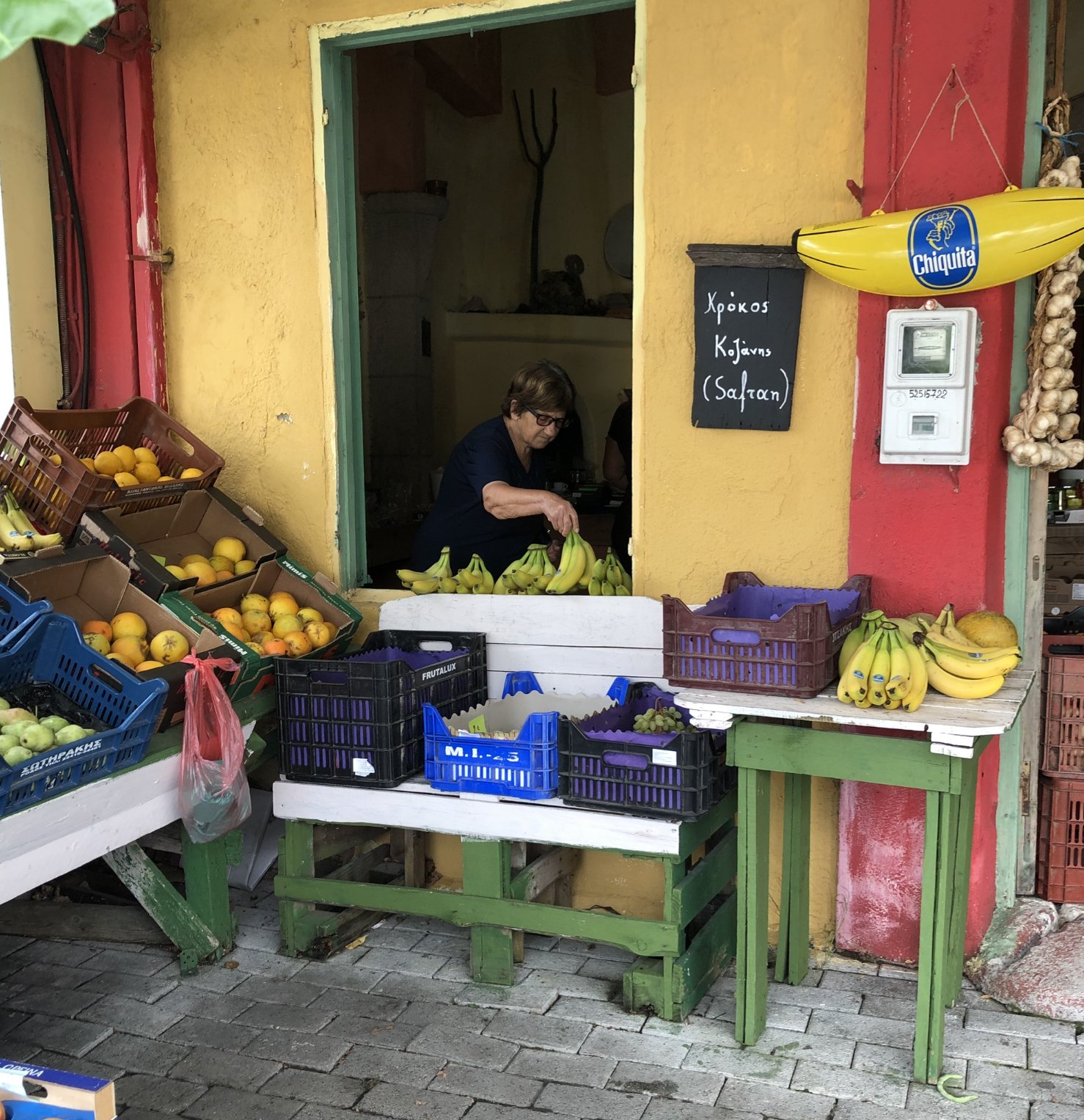 I was watching a video today to help psych myself up for the last round of habit changing that I will have to start immediately if we want to continue the year of travel and I came accross an interesting statistic. Of a group of over 1000 people studied over the course of 20 years, those who ate the most animal products had the highest incidence of diabetes and those (in that group) who were vegan had none. Not one person had diabetes.* The statistics about reversing Type 2 diabetes are astonishing but it means no animal products. It means eating a plant-based diet. It means radical, permanent change.

When Peter and I decided to leave Alaska (3 reasons: terrible work environment for both of us, terrible health crisis for me and too many negative experiences that were out of our control, like car accidents, surgeries and earthquakes) and travel the world for a year, the one thing holding us back was my health.  I had struggled with my weight for years having tried diets, calorie counting, low-carb, Atkins, South Beach and medications. I was over 280 pounds, my diabetes was out of control, I had early stage kidney failure, painful arthritis,  bad knees and a slipped disc in my lower back, liver adenomas, allergies, sleep apnea and plantar fasciitis. Peter wanted to lose a few pounds and eat kinder - kinder to the planet (NOT “children” in German!) and to the beings dwelling therein. We did not imagine that this road would take us to veganism.

We made very specific changes - one or two per month until they became habits or routines, not just fads or diets to lose weight.** First we quit fast food all together. Then we started drinking more water - 6 glasses per day plus other beverages. Then I quit all meat and Peter followed suit. Processed and packaged food went out the door. Then we started (I started, Peter was already doing it) going to the gym. Then we cut out deep-fried food and we cut out butter. We started trying to eat 6 servings of fruit and veg per day, or more. We bought kitchen gadgets and we tried new recipes. Then we cut out all milk and finally almost all cheese. All the dairy went in May and then I kept going by quitting sodas and then caffeine. We started doing yoga daily in June.

But the cheese had drawn us back in in Greece. We were still eating eggs every day and incidental dairy - like in bread. In all fairness, it is hard to buy vegan food on the islands. In Alonissos there were only black eyed peas in the legume department and we were living with a family - a healthy family - but not a vegan family, so they ate a lot of cheese or at least it was available. We liked to go out to eat a few times a week to be alone and we ended up knee deep in tzazkiki and Haloumi and feta - every day. But we said, hey it is only a few times a day... then it just became, well, a habit. So, habitually eating cheese and still eating egss, I hadn’t lost any weight since June and the blood glucose levels had started to come back up. Pretty soon a lot of aches and pains and fatigue showed up too.

It isn’t easy to be different. I don’t drink alcohol or coffee (anymore), we have no kids, play no sports, have no pets, heck, we don’t even have a house. I mean, at least Peter has beer and football to keep him “normal.” (As normal as a 6’5” German-sounding bald dude can be.) We are Christians, but we are the kind of Christians who also believe in climate change, equal rights, gender fluidity, separation of church and state and free will. Even though we are very pleased with our choices it often feels like there are very few kindred spirits out there. Becoming vegan was a further step toward living alone on an island getting crates o’ veggies and books flown in to hide our weirdness from the world.

Ugh and then the morality hit us. We were on our second Workaway in France and we could hear the cows crying all the time. I am not exagerating. Dairy farming is not kind. The stray cats all over Greece were another wake-up call. The incredible level of irresponsibility for animals in Greece is really disheartening. When I went fully vegan in early October I watched a few videos supplied by new friends in the online vegan community and WHAT THE HECK?! Now I am even concerned about wool and animal rights and tail docking and overbred dogs and old horses...gulp.  The cognitivie dissonance it requires to eat meat but “love” animals is astounding but the same goes for dairy and wool and leather. You have to let go of all of it when you take a moment to examine the sources, suffering and industries behind your choices. Taking a moment - that mindful examination is why a lifestyle, not a diet will save my life. It may also save a few other folks and the planet as well. It is the mindless, non-thinking that makes you reach for the 10th cookie or pull into McDonald‘s. It is the impetus behind owning 35 pairs of shoes. (Guilty!) It is the temptation to throw out things that others might find useful. And it is the reason we are fracking in the United States instead of finding renewable forms of energy among other hideous societal and governmental damage that has become an American staple. So, now I am vegan. Peter is still eating dairy and eggs when they are offered but he is about 95% vegan. We used to tell people we were “veggan” or ovarian instead of taking the last step toward veganism - but now we don’t have to do that.

In France it is almost impossible to eat vegan., First of all, everyone tells you how stupid you are not to eat cheese and meat all the time. Then they tell you to have a little wine (causes breast cancer) and stop being so severe and just enjoy life!! Frankly, the French are the pushiest, most overbearing people I have ever met. The Greeks are funny about veganism too. If you ask for the ingredients or tell them you are vegetarian or vegan they say. “Don’t worry.” WHAT ON EARTH DOES THAT MEAN. They also say “don’t worry” about car accidents, hotel room mix-ups, flash floods and delayed flights so it must be some sort of mass hallucination that if you say “don’t worry” everything will be fine. In the UK and Germany, we have found it is easy to be vegan - really easy. People are respectful and supportive and everything is clearly labeled. Ireland is so far, very easy as well. (We are here now!) Spain, Jordan and Morocco will be interesting!

When dining out it is important to tell servers that you have allergies and preferences. If you don’t speak the language you must look it up online and make sure they understand. For vegans and vegetarians, the Happy Cow app and website*** is indispensable.

Here are some places we ate that were vegan and vegetarian friendly with some delicious looking pictures!

Germany - Sattgrun in Cologne. Near the Dom and shopping. Buffet style with many choices for all tastes and prices are according to plate size. Incredible soups! 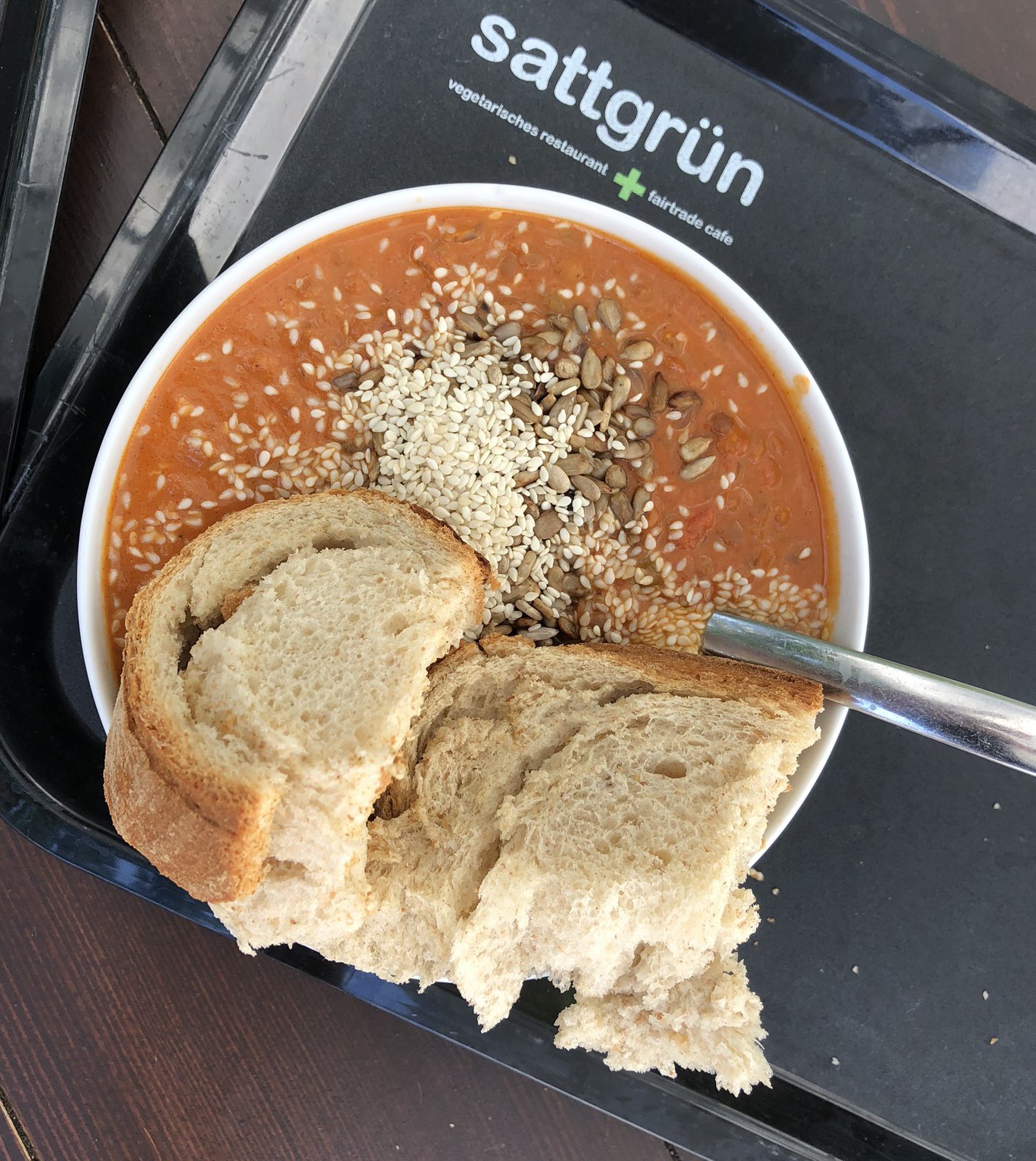 Scotland - Foodstory in Aberdeen town center. Vegan stronghold with yoga classes and all sorts of community activities. Board games welcome and lots of yummy food. Some options were vegetarian.

Greece - Give Peas a Chance, Athens. 15 minute walk from the Acropolis,  open later than most places, fully vegan menu with incredible bowls and smoothies. Bring your translator. Big table in the back for working and meeting like-minded people.

Greece - Mama Sofia in Rhodes. Inside the Old City by the St. Anthony Gate. Full vegetarian menu and they will make vegan equivalents to order. Amazing vegan smoothies! 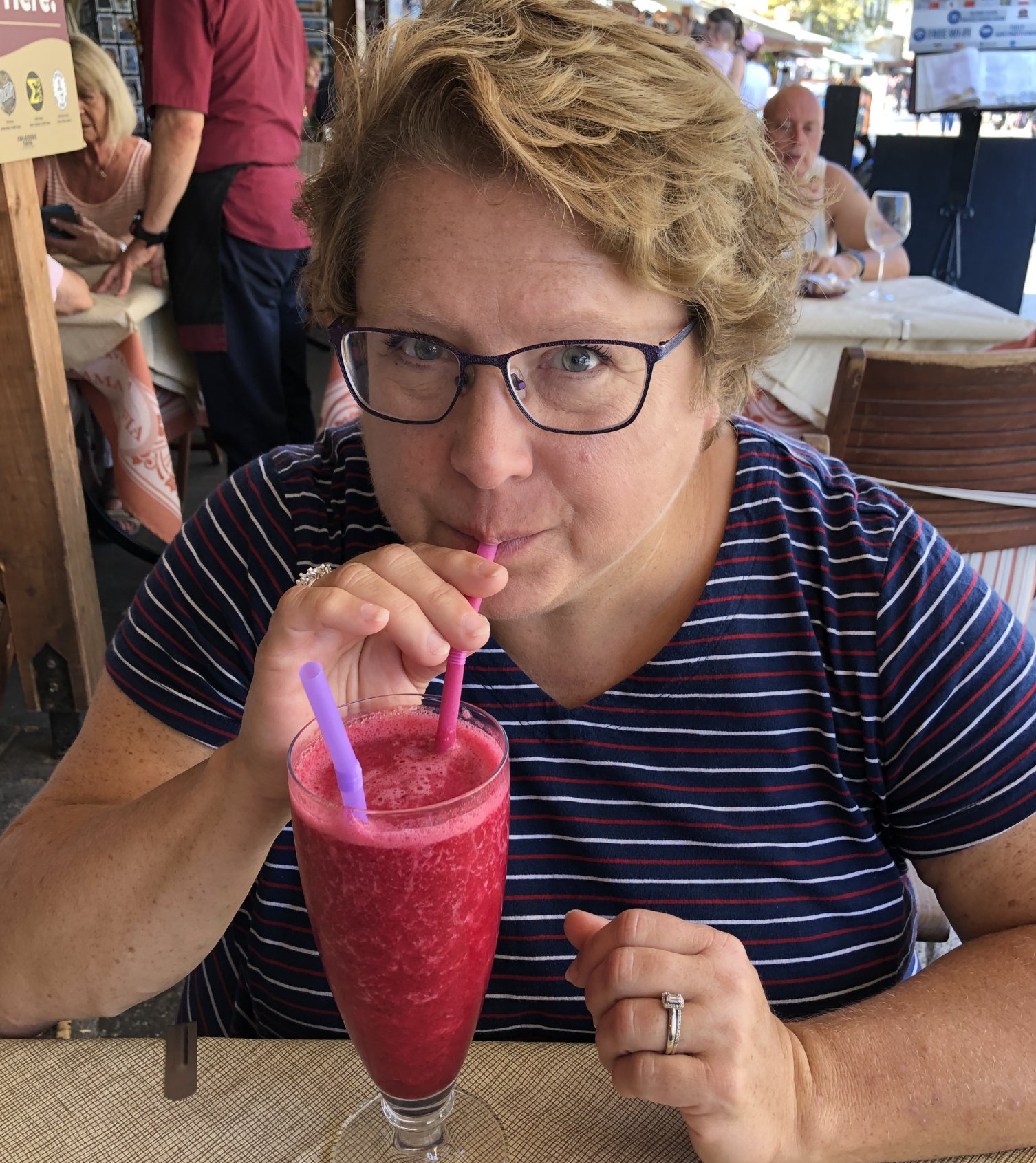 Greece - Gel-o-blue in Lindos. Within the old city. Amazing selection of gluten -free, vegan, keto and paleo desserts, lunches and snacks, including ice cream! Run by a local family. 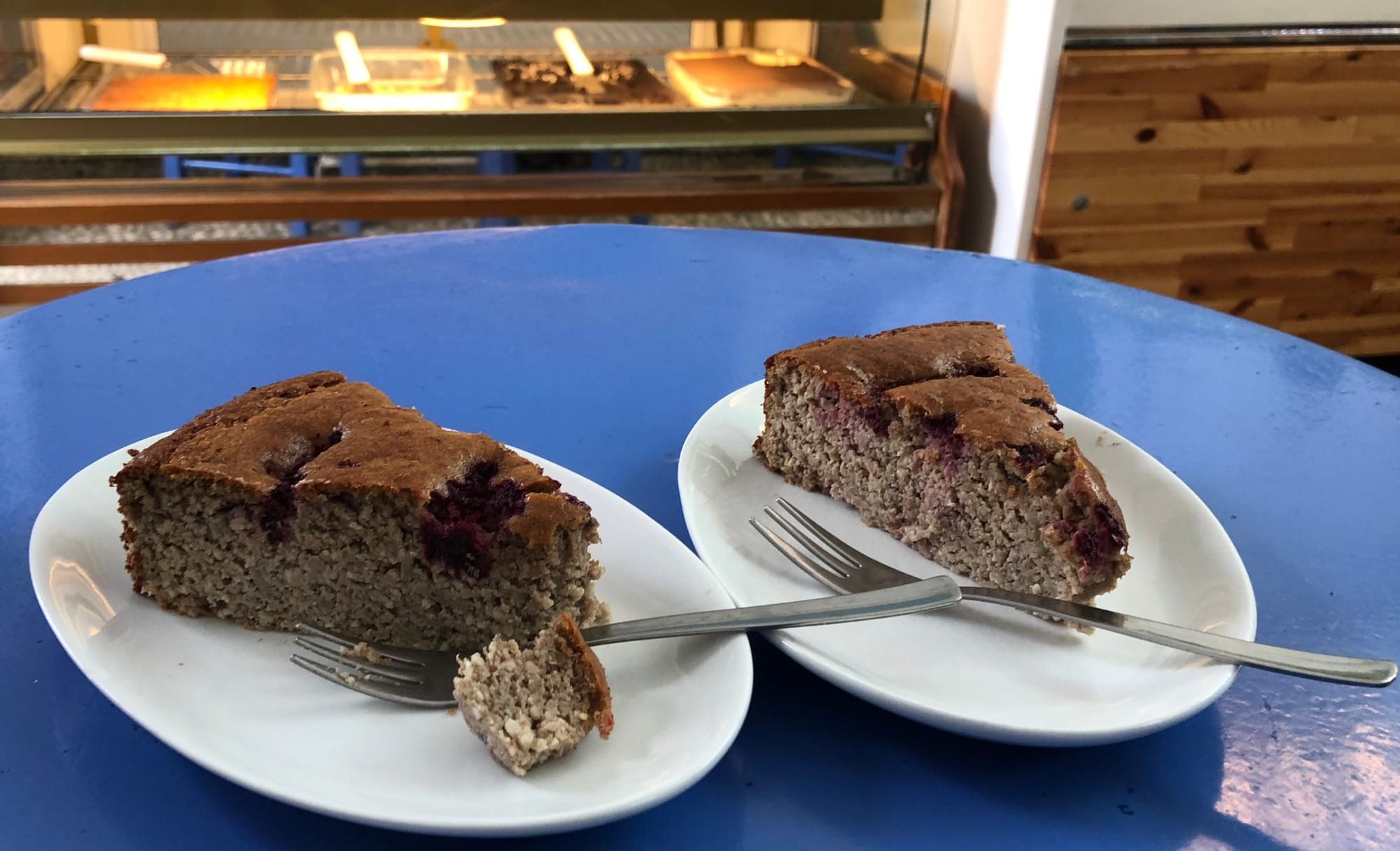 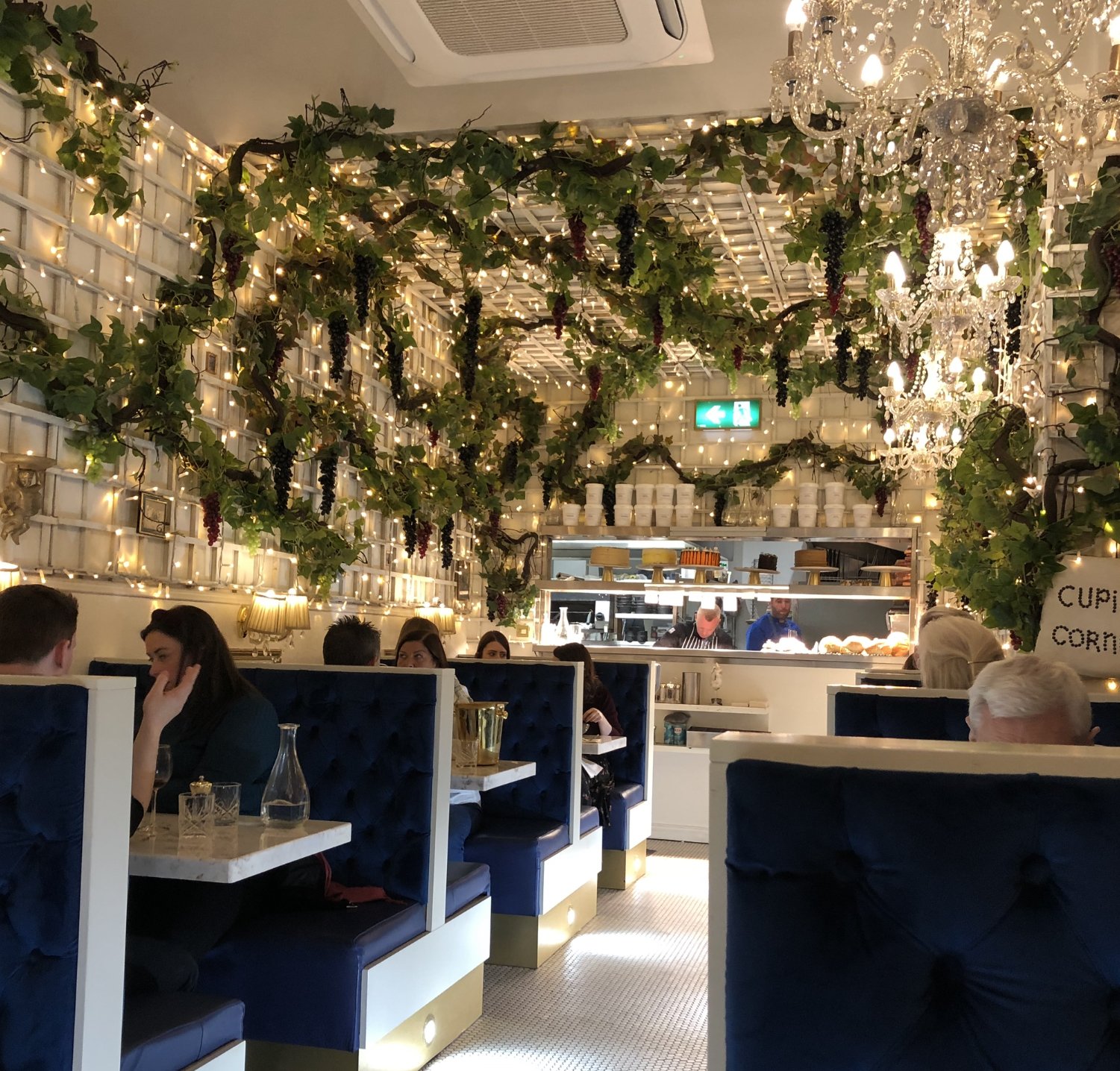 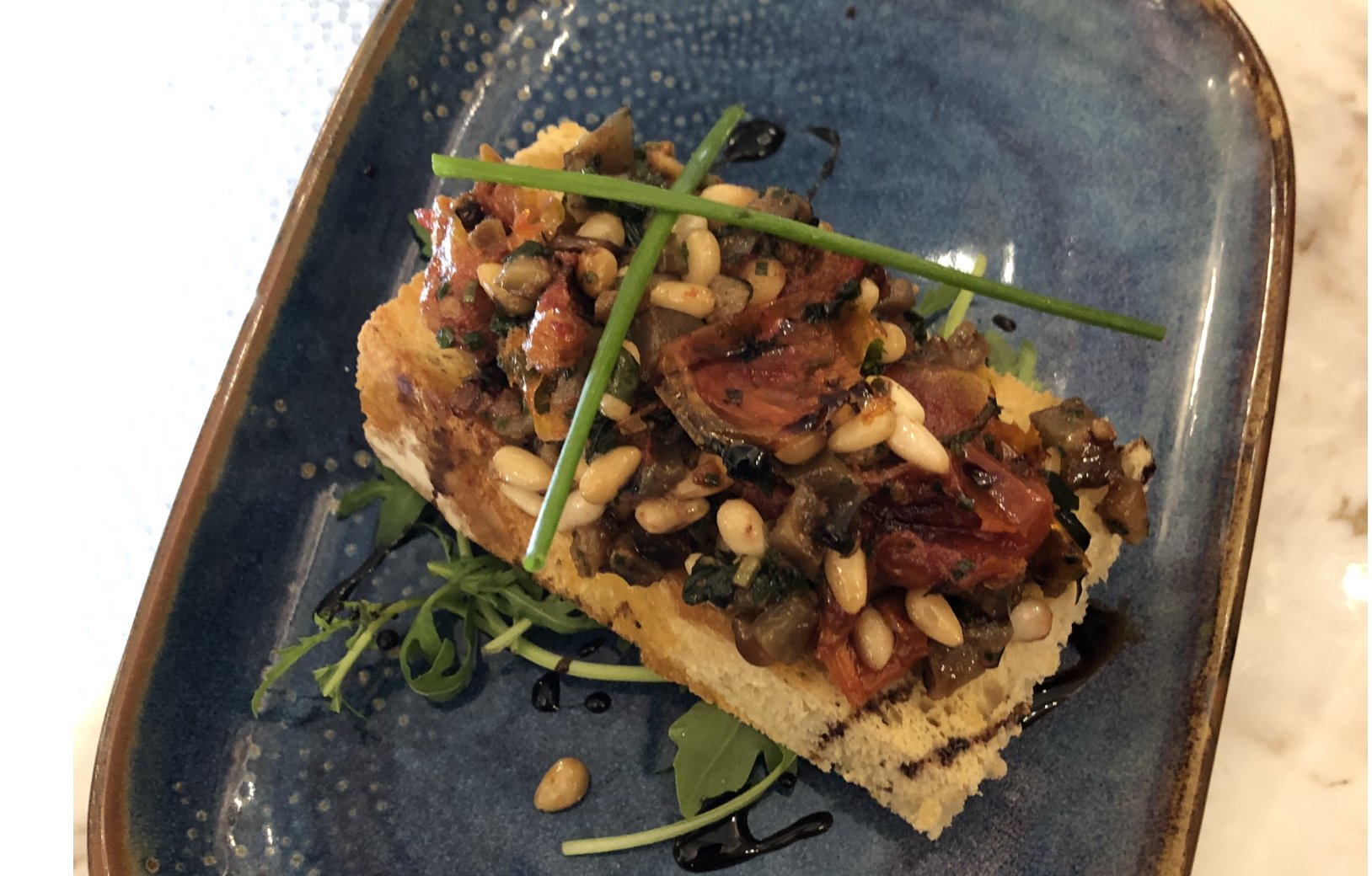 Northern Ireland - Eat Steet in Belfast. On Lisburn Street near Tesco, easy bus connections. A totally vegan restaurant with a full and inventive dinner menu, coffees, teas, cupcakes and a fun vibe. We ate dinner there twice. The chicken filet burger was soooo good, as was the crab linguini. Starters were also delicious. 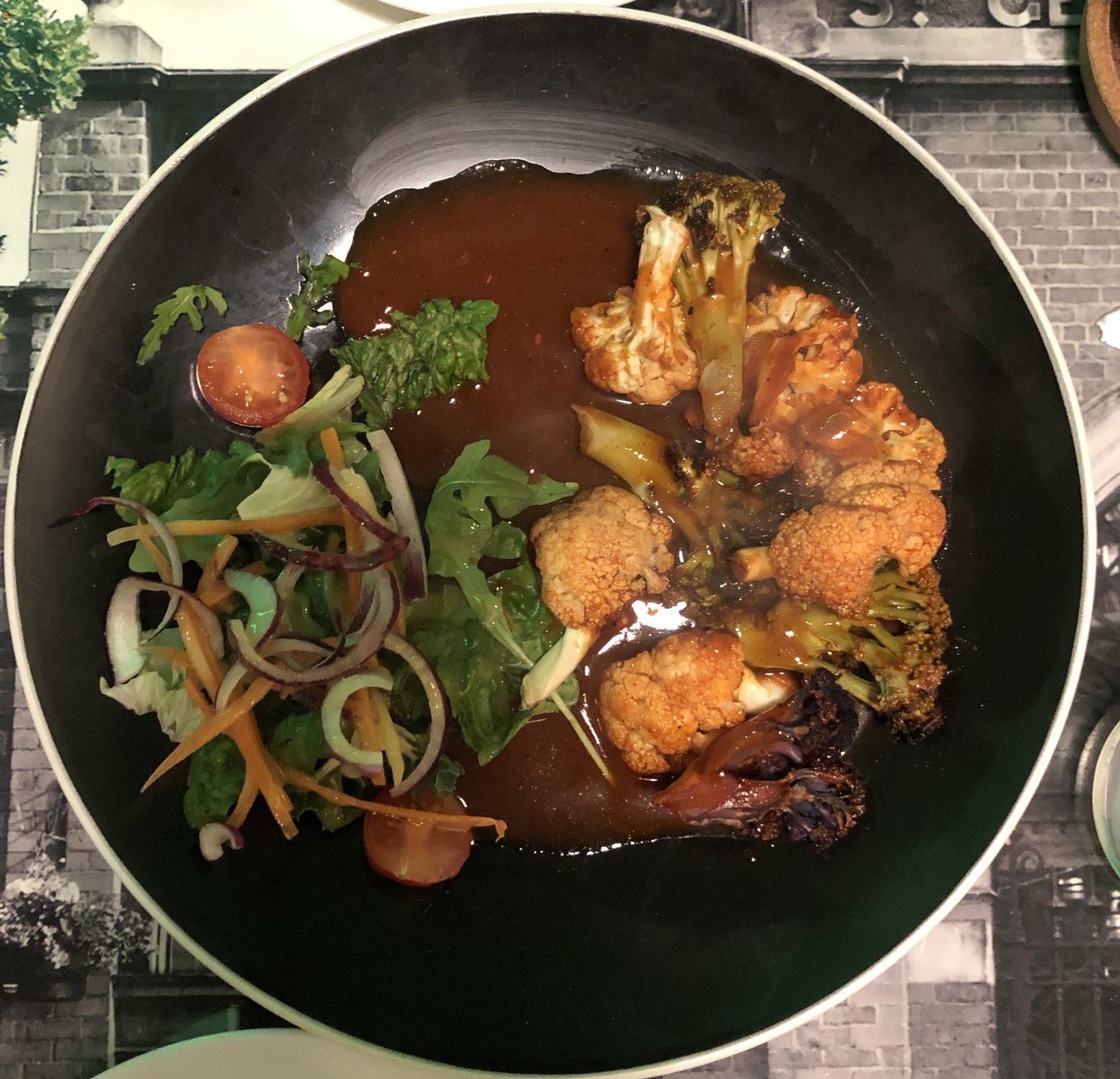 Barbecued veg and a small salad

Ireland - Sweet As... in Sligo. Serving only vegan food in a fun and relaxed atmosphere with tons of yummy baked goods! This restaurant is one of two vegan places in Sligo town. We had the beans and salad platter and took some blueberry muffins home. The coffee was good too. 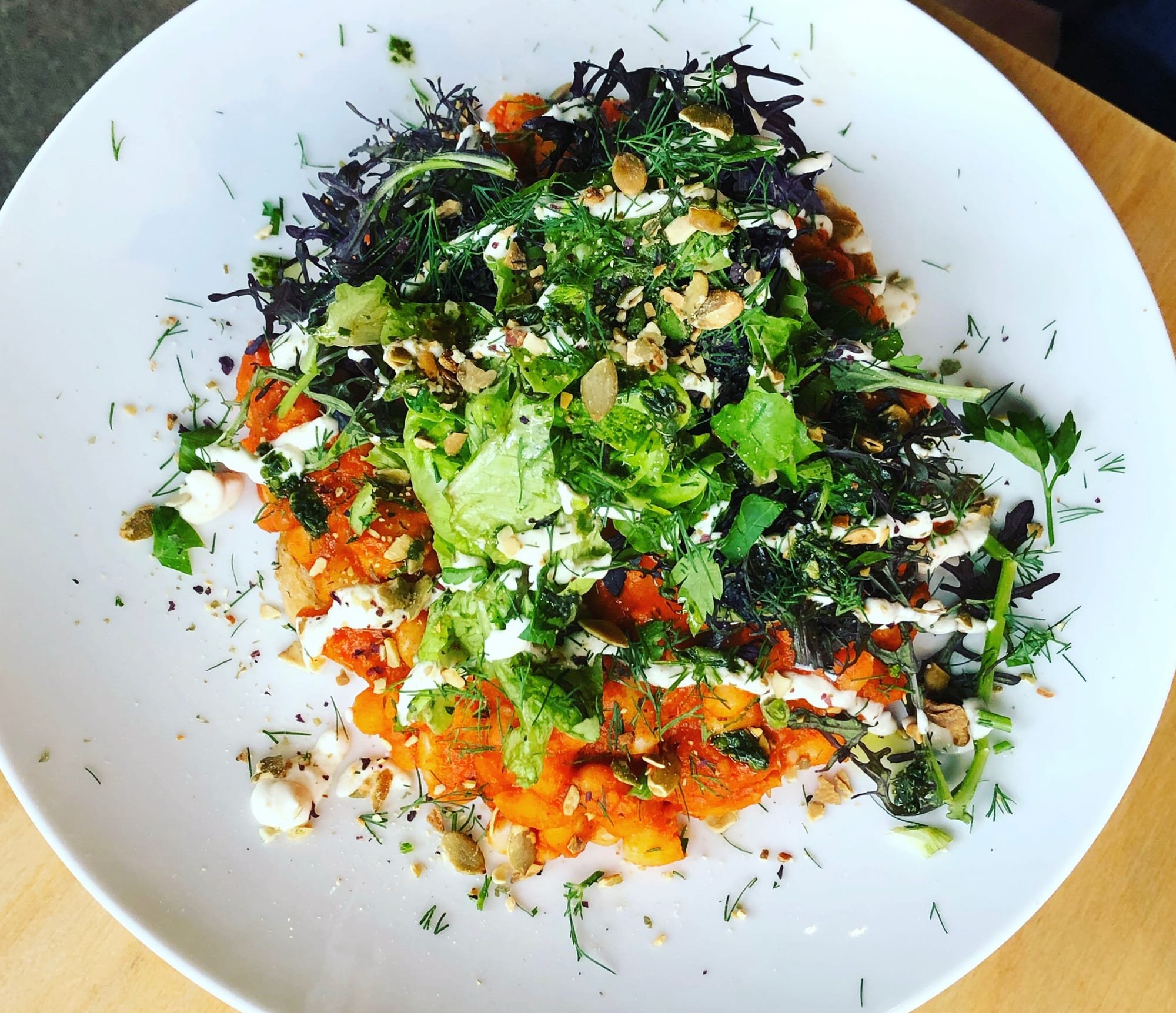 France - Ah! La Belle Histoire in Concarneau, Brittany. Serving only vegan food and many raw options, we fell in love with the cacao smoothies and the raw lasagne. Very impressive and personal, caring staff. 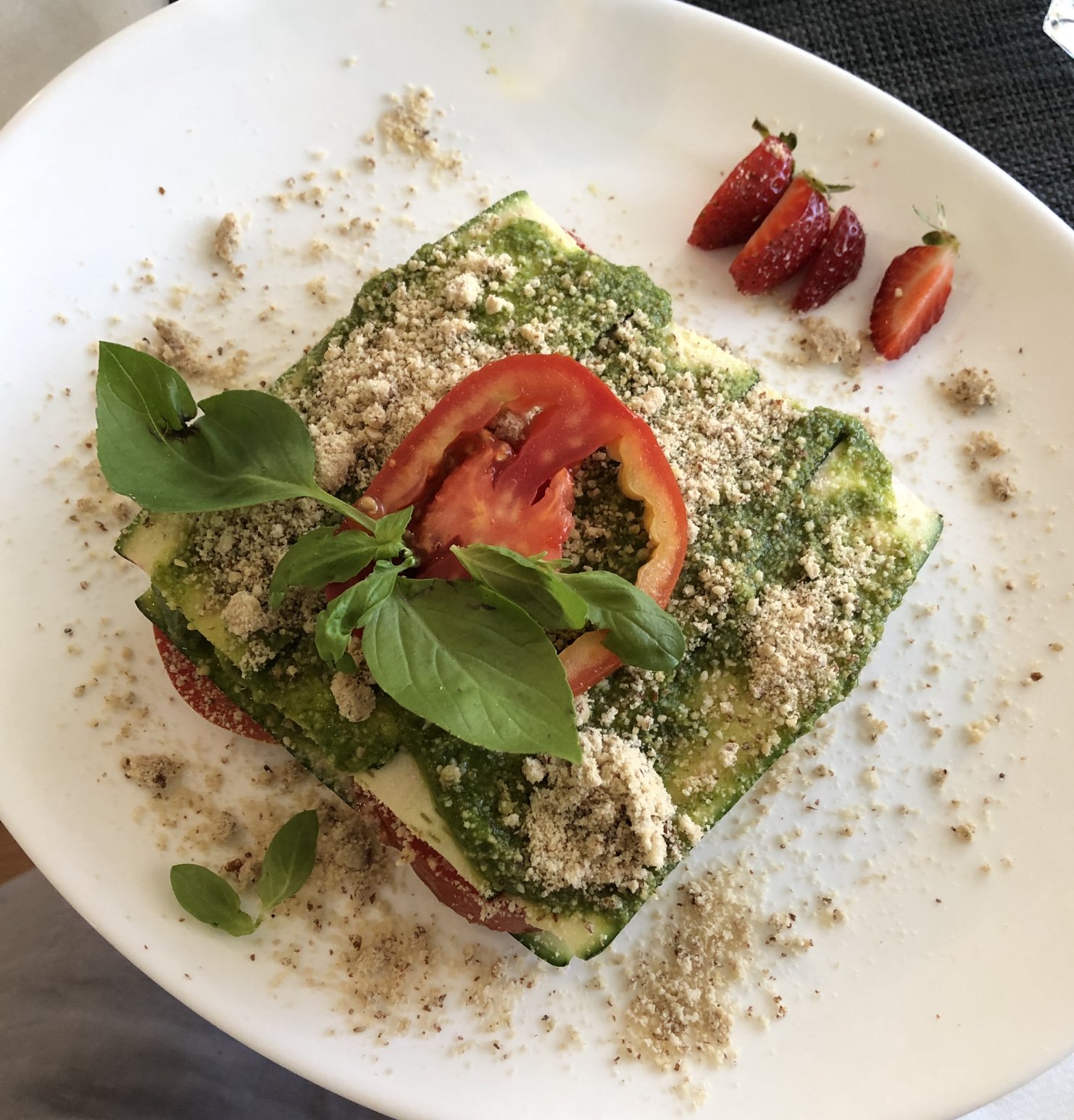 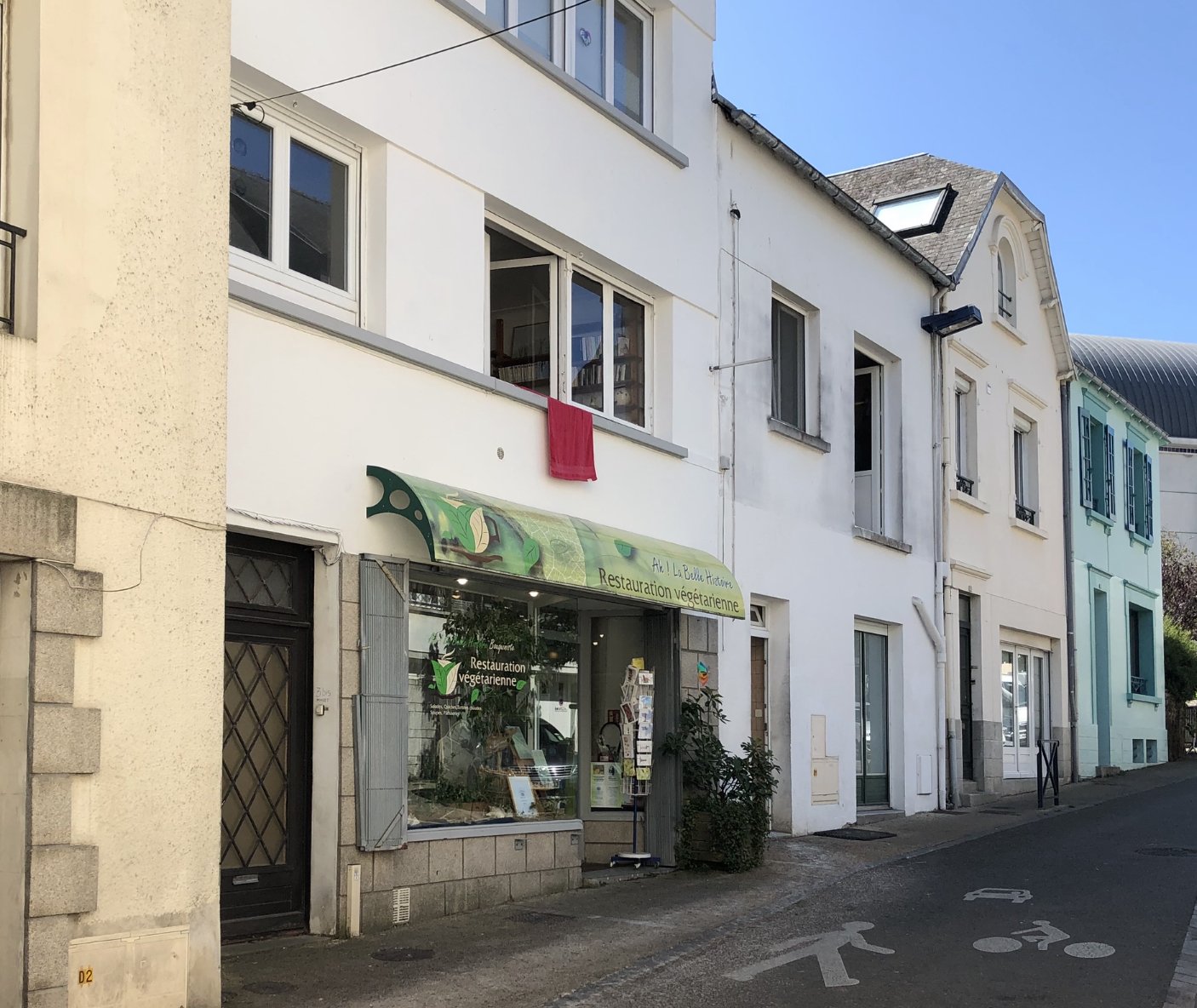 1. Ask the waiter if accommodations can be made. Very often, except in France, we were able to order something that was not even on the menu. For example, delicious vegan grilled vegetables with sesame seeds and hummus in Greece or really lame boiled and tasteless vegetables at a normally good inn in Belgium.

2. Bring your own protein source. I travel with beans. I can add them to salads and soups to up the protein quotient.

3. Learn to get up and leave. If they can’t or won’t make you something to eat, just go. Preach with your wallet.

4. Museums - We had a lovely vegan salad selections at the Ulster Museum in Belfast! Many larger and smaller museums have wonderful cafes and they often have options for everyone. 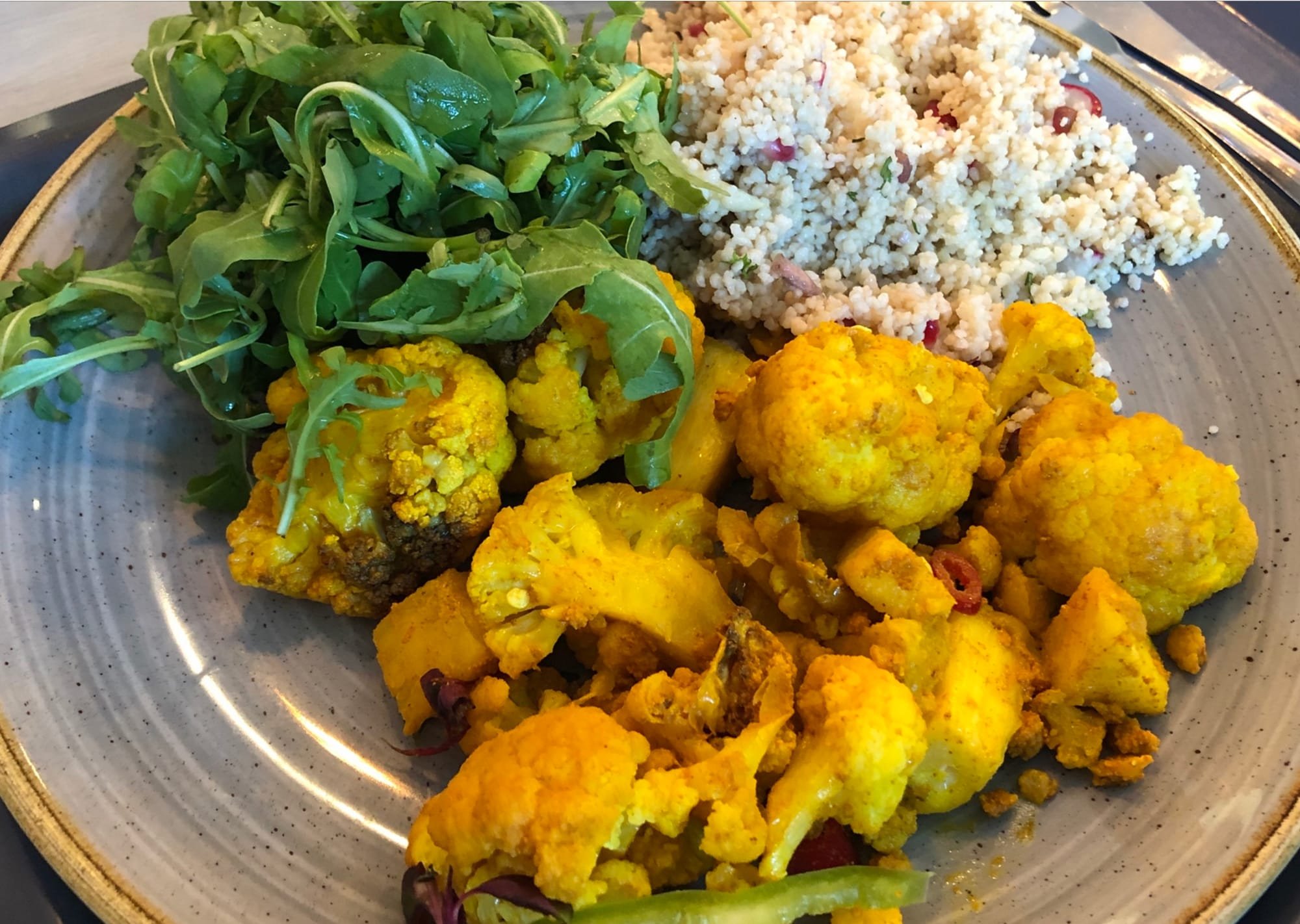 5. Don’t take it personally and don’t proselytize. Not everyone is there yet. Your snit may turn someone off to a lifestyle change that will reward and delight them. Be kind but firm!